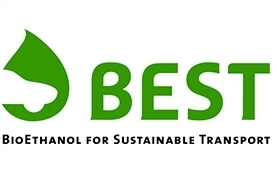 The objective of the BEST project, co-financed by the European Commission in the 6th Framework Programme, was to demonstrate an extensive substitution of petrol and diesel by bioethanol and to initiate a lasting and accelerating development of bioethanol-fuel all over Europe.

Within BEST more than 10.000 FFV, 150 bioethanol buses and 140 fuelling stations (E85 and ED95) were demonstrated in 10 strategically chosen European cities and regions. Furthermore, the BEST project stimulated cooperation of European stakeholders with existing or promising bioethanol fuel markets in Brazil and China. In this respect the BEST project included demonstration activities of Hybrid Electric Vehicles (HEV) and bioethanol buses in the city of São Paulo coordinated by the Brazilian Reference Center on Biomass (CENBIO), the Institute of Electrotecnics and Energy at the University of São Paulo, and WIP Renewable Energies.

São Paulo is the first city in South America demonstrating the economical and technical viability of public buses fuelled with ethanol in order to investigate opportunities for a reduction of the pollutant emission in urban transport. In order to guarantee the success of the BEST demonstration activities and to provide the ground for a future large-scale implementation of ethanol buses in Brazil, a cooperation agreement with a large variety of important Brazilian and European stakeholders was signed.

Based on the results of the BEST project it was announced in late 2010 by the city mayor that ethanol buses will become part of the public transport system in São Paulo and 50 buses will go into service in 2011.