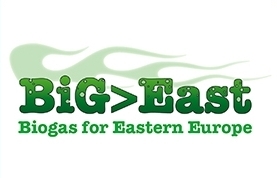 Promoting Biogas Production and Use in Eastern Europeors

1The general objective of BiG>East was to promote the production and use of biogas as a secure and sustainable energy source in six target countries of Eastern and Southern Europe: Bulgaria, Croatia, Latvia, Romania, Slovenia, and Greece (BiG>East target countries). The BiG>East project aimed 2to build capacities and transfer knowledge from project partners of Western Europe with extensive biogas expertise to farmers, biogas plant operators, and decision makers in Southern and Eastern Europe. This was achieved by the organisation of 13 mobilisation campaigns for decision makers, 18 training courses for farmers, and several 3study tours. Show cases were elaborated to support the mobilisation campaigns, and training material (biogas handbooks) was prepared for the training courses. BiG>East was coordinated by WIP and included 12 partners. This project (Contract No. EIE/07/214) was supported by the European Commission in the Intelligent Energy for Europe Programme.