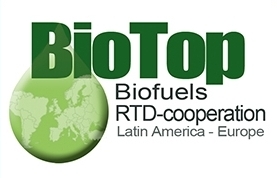 Due to the high potential of biofuels in Latin America (LA) and the increased demand for biofuels in Europe (EU), the aim of the European Commission was to identify scientific and technological cooperation opportunities with Latin American stakeholders. Therefore, the European Commission supported the BioTop project “Biofuels Assessment on Technical Opportunities and Research Needs for Latin America” (Contract No. FP7-213320) in the Seventh Framework Programme for Research and Technological Development (FP7).

Various studies on the biofuel sector in LA were elaborated and provided a basis for the identification of research needs and cooperation opportunities.

The BioTop consortium, consisting of five European and five Latin American partner institutions, identified these needs and opportunities in dedicated work packages on improved conversion technologies, standardization and trade, as well as on sustainability. Scenarios on biofuels research were elaborated and contributed to the development of policy and research recommendations at the end of the project. Finally, the project partners disseminated the project by different means, including the organisation of three EU-LA cooperation workshops in Sao Paulo (Brazil), Buenos Aires (Argentina), and Valparaiso (Chile). Furthermore, four study tours were organised to the Biomass-to-Liquid (BtL) plant of CHOREN Industries in Germany, to a biodiesel plant in Argentina’s main soy production area Santa Fe Province, to two biogas plants in Santiago de Chile, as well as to the lignocellulose bioethanol plant of ABENGOA and to the research facilities of CIEMAT in Spain. A final BioTop conference was organised in July 2010 in Brussels.