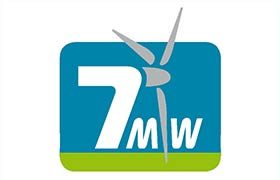 Pilot Demonstration of Eleven 7MW-Class WEC at Estinnes in Belgium

A key objective of the "7-MW-WEC-by-11" project is to introduce a new power class of large-scale Wind Energy Converters, the 7MW WEC, into the market that has the potential to significantly contribute to higher market penetration levels for wind electricity in Europe. The new 7MW WEC is designed and demonstrated at a large scale: eleven such WECs are demonstrated in a 77 MW wind park close to Estinnes (Belgium). Since September 2010 all eleven WECs are operational. The wind park is the first large-scale on-shore wind park in Belgium and the first in the world that consists of this "mega" turbine power class.

First, the "mega" turbines were developed and installed "in series"; this was envisioned to significantly reduce costs and increase the market value. Second, new power electronics technology and improved wind forecasting are used to stabilise the grid in the high capacity wind park. "Improved forecasting" is envisioned to furthermore improve the cost-effectiveness of the high capacity wind park (reduced imbalance costs, improved commercial value). Third, the 7MW turbines are used to maximize wind energy capacity, while reducing landscape pollution and environmental impact: such a WEC generates more than twice as much energy in the same given area at Estinnes when compared to conventional 2MW turbines and requires the placement of fewer turbines when compared to conventionally used wind turbines.

"Lessons learned" in developing the high capacity Estinnes wind park will be adapted to a different national context with a weak grid system, Cyprus.

Since September 2010 all eleven wind turbines are fully installed and operational. The picture below shows the Estinnes wind park with 11 operational Enercon E-126 WECs on 10.10.2010. It was taken by Tony Aerts/ Belgium.